This large project comprises the publication of four archaeological excavations of 1974-81 around the north end of London Bridge in the City of London: Swan Lane (1981-2), Seal House (1974), New Fresh Wharf (1974-8) and Billingsgate Lorry Park (1982). The excavations were conducted by the Department of Urban Archaeology (DUA) of the Museum of London.

The Swan Lane and Seal House excavations lay on the upstream, west side of the present London Bridge in Upper Thames Street; New Fresh Wharf and Billingsgate lay on the downstream, east side of the present Bridge in Lower Thames Street. These two pairs of sites were similarly west and east of the north end of the medieval and Roman London bridges.

Publication of the sites 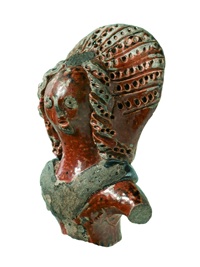 A small effigy, perhaps a toy, from Cologne, from from the buildings at Billingsgate which were destroyed in the Great Fire

All four sites, being in the reclamation zone of the north bank of the Thames, found Roman and late Saxon (10th-11th century) waterfronts; these have been published. The second stage of the project was to publish an account of them in the period 1100 to 1666. This will be a key document to promote research into the thousands of artefacts and several hundred kilos of British and foreign pottery which have been found.

On 30 April 2018 Archaeopress and CoLAT jointly published this large (550-page) monograph, London's Waterfront 1100-1666: excavations in Thames Street, London, 1974-84 . Below you will find a link to the press release and summary of the monograph.

CoLAT is also pleased to host here the complete text as a single PDF file, which can be downloaded free of charge. This is the same as the text on the Open Access page of the Archaeopress website.

Attention is now turning to a third stage in the project, the analysis and publication of the buildings and artefacts from the four sites in the period after the Great Fire, that is from 1666 to 1800. This was when the port of London began to be the organisational hub of the new British Empire. Funds were awarded to the project by CoLAT in 2019 to finish the necessary post-excavation assessment of the sites for this period. The project is called London’s Waterfront 1666 to 1800 , and is directed by John Schofield. An outline of the project in August 2019 is given below in the Documents and Video section.

In April 2021 we added two files for downloading here. The first is the current draft of the text of London’s Waterfront 1666 to 1800 by John Schofield and Stephen Freeth. The second is a summary of the post-excavation asessments of the artefacts (pottery and non-ceramic finds) as available in March 2021 . These are placed on the CoLAT website for all interested readers and discussion. The necessary work on the assessment and research on the many artefacts has been halted by the COVID-19 pandemic. We hope to resume work in due course. To make any comment on the text, or to use any of it, please contact John Schofield, john@jschd.co.uk .

Use of the material 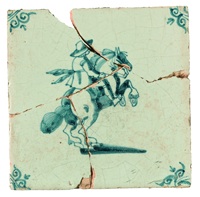 17th-century houses on the London waterfront were decorated with Dutch tiles. Fragments were found at Billingsgate; this is a complete example from an excavated site nearby in Botolph Lane

You are welcome to download any of these files. If you wish to use any of them in your work, please contact John Schofield to ask permission and to get the method of citing the report correct. The project authors are happy to discuss anything emerging from the current work with colleagues. Further, we encourage students of any kind, and their supervisors, to consider conducting research on this material, perhaps on a small group of finds, pottery, or strata (contexts). The material here will be added to as the project develops.

Archive reports and archive data which are currently being worked on

The archive report on the largest site, Billingsgate Lorry Park (BIG82, also called Billingsgate for short) is the narrative account of the ten stratigraphic periods on the site from the 12th century to the 18th century.